﻿The branch arranges travel in a group, many in family groups to matches, using different hotels in Leeds city centre.  Fly from Belfast city to Leeds Friday afternoon returning Sunday.

We get together at meetings to talk about "all things Leeds United" and arrange tickets and transport to matches. We even occasionally organise social events!

Meetings are held every other Tuesday at 8pm.﻿ at the Shovels Public house 260 Common Edge Road Blackpool FY4 5DH 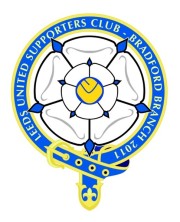 The original Branch was over 45 years old but circumstances prior to the 2011/2012 Season meant a new Branch had to be set up. LUSC Bradford Branch is a Family Branch with over 205 Members ranging from 8 months to 85 years young.

Tommy McGuinness,Carol McGuinness and Colin Smith are the Committee and have over 45 years experience between them as Committee of the LUSC Bradford Branch. We organise Tickets and Travel or Travel only to all Leeds United matches.

Meetings are held before Leeds United home games generally at the start of the Month at the Central Division Sports and Social Club BD5 0RA.﻿

The East Anglia Branch was formed in 1981 and until recently provided transport to all matches, transport is still provided to selected matches throughout the season. Tickets can normally be obtained for members to most matches. At it’s peak in the late eighties the Branch had over 170 members

East Antrim branch was founded in 1994 and meets at Greenisland Memorial sports club on the second Monday of each month (7.45p.m.). We travel to both home and away games and new members are always welcome, We will be celebrating our 20th Anniversary next June

he current membership covers a wide variety of areas, with fans from Thirsk, Leyburn, Harrogate, York, Knaresborough, Falkirk and Leeds all represented. Meetings are held at the Londesborough Working Men’s Club & Institute at 8.00 on the first Sunday of each month at Bower Road in Harrogate, and all are welcome to attend. The branch attends the annual dinner and the quiz nights organised each year by the Executive, along with any other social functions.

The branch was formed in 1982 (as the Knaresborough Branch), as a result of the original Harrogate Branch folding due to a lack of numbers. The old Harrogate branch had run coach travel to home fixtures, but had not organised travel to away games. The new branch was set up with the intention of running affordable travel to all Leeds United away fixtures, and has continued with this policy over the years. The branch name was changed from the Knaresborough Branch to the current name in 1996 following a closely contested vote.

Travel is organised to away games only, as most members make their own way to home games. Away travel is via executive coaches provided by York Pullman, and pick-ups are made in Knaresborough, Harrogate and Leeds.  Match tickets can be ordered for members of the branch for both home and away fixtures, with payment made on the day of the match for those travelling by coach. Bookings for coach travel, match tickets, etc can be made by phone or e-mail. 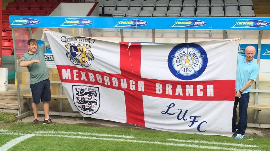 The North Wales Branch was formed during the summer of 1982. The aim of the branch is to provide affordable transport to home and away matches. The branch has members from all over North Wales and the Chester area. It is a family friendly organization which welcomes members of all ages. The coach sets off from near Pwllheli and picks up along the A55 and at the Cheshire Oaks retail outlet near Ellesmere Port.﻿

We run transport to all home and away games, plus friendlies, from our district. Trips to away games are run in conjunction with Doncaster Branch. We hold weekly meetings and offer a home and away ticket ordering system based on advance deposits and balances paid on the day. Meetings are held in the Minsthorpe Pub, South elmsall 8pm Tues, or on Monday if we have a Tuesday game.

The aim of the Branch is to provide members with affordable transport to Leeds United home and away games and the opportunity to socialise with other West Midlands based Leeds United Supporters.  The Branch is a family friendly organisation and we welcome supporters of all ages.﻿

Branch Meetings are held monthly at various locations in the area.

Worksop & District Branch has been in existance since its formation in 1973. Our membership covers a wide area including Nottingham, Mansfield and Worksop and all surrounding areas in Nottinghamshire & South Yorkshire. Our aim is to provide transport and tickets to all Leeds United first team matches, home & away, throughout the season, either with our own coach hire, or in some cases teaming up with other official branches.. Meetings are held at the Cannon Pub, Carlton Road/Thievesdale Lane as and when required