Burst onto the scene by scoring with his first touch against Liverpool at Anfield, in front of the KOP. was part of the Leeds run to the Champions League semi final. Blotted his copybook with many fans when he crossed the Pennines!

The only player to win the Player of the Year Award in consecutive seasons.

Made his debut in the 2004/05 season and quickly established himself as a favourite with the fans.

Jermaine won the hearts of Leeds fans with a series of crucial goals, one in particular ensured his place oin Leeds Folklore!

The Argentinian had a good pedigree when he arrived at Leeds. Starting as a youth with Boca Juniors, he came to Europe, arriving at Leeds via Barcelona B. 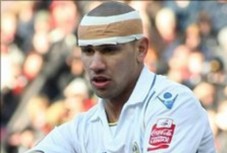 The popular Aussie suffered with injuries during his 4 years with Leeds (July 2009 to May 2013) making only 49 appearances with 1 goal. On his debut against Exeter he suffered a head injury that needed 12 stitches. THis caused him to wear a trademark bandage on his head after that. His plucky displays won the hearts of Leeds fans. It didn't do him any harm playing in the side that beat Man. Utd. in the FA Cup that season. With a total of 18 caps he became the 100th Leeds player to be capped